This is the G Pen Elite, a new portable vaporizer for dry herb made by Grenco Science (G Pen), makers of the ubiquitous G Pro vape.

This new model is a big improvement and it’s a unique design from the ground up. It’s smaller, more advanced, and has an even bigger herb chamber, giving it one of the largest ovens on the market in a portable vaporizer. 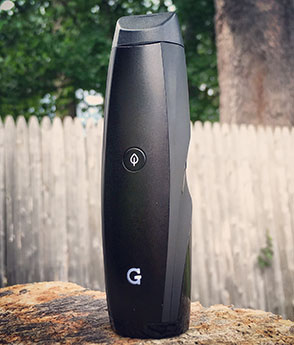 There’s only two main parts to this thing: The mouthpiece, and the rest.

The body of the vape itself has a single power button on the front and a micro-USB charging port on the bottom. On the side of the unit is where the led screen is that shows you the temperature and battery indicator. It really does feel nice in your hand, there’s even a groove for your finger to rest in, and the weight of it is perfect – not too heavy at all but also not feather-light.

The mouthpiece has a silicone cover on it and a small stainless steel screen built-in at the bottom. It actually feels pretty comfortable on your lips and the tip is curved a little also to match the aesthetics of the rest of the vape.

Now, the original release of the Elite had a completely open pass-though mouthpiece design, meaning there was nothing in the way of the vapor going straight from the oven to your lips. This was nice for extra airflow but it didn’t allow the vapor to cool enough so I personally felt that it was a little hot and harsh feeling most of the time. 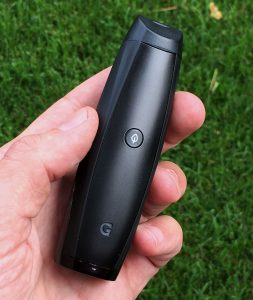 To G Pen’s credit, when I brought this issue up with them they let me know that they were already working on an improved mouthpiece to address the hot vapor, so they’re definitely on top of their sh*t.

The new top piece is now shipping with all Elite kits and I personally feel that it’s a much, much nicer vaping experience with it – I’m glad I waited to do my review. It was completely redesigned with a new internal air channel to help cool and soften the vapor – from the outside it looks the same as the original but it’s totally different on the inside. You can’t see straight through the screen into the oven any more, the vapor actually has to make a few turns inside before it reaches your mouth.

For its size I also have zero complaints about battery life, it’ll give you about 45-60 mins of usage from a full charge (~5 sessions). It’s gonna take a couple of hours to fully recharge so I would pick up a USB power bank for easy charging on-the-go.

The oven in the Elite is big, pretty much the largest chamber of any portable vape I’ve reviewed with a capacity upwards of .75g if you grind really fine.

Believe it or not I usually don’t consider this a big positive, but what’s cool about this vape is that you don’t have to pack it full and tight to get good performance, it’ll still work very well with a loose pack of just ~.25g. All you have to do is hand-pack this one loosely up to the brim and pop the mouthpiece back on and you’re good to go. 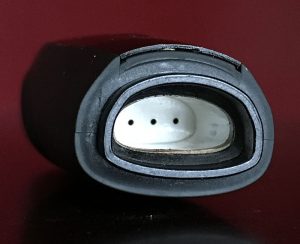 Now if you want to push the limit and get maximum vapor production from this thing you should do these simple things: 1) grind your herb finer, and 2) pack the oven tighter.

What you can also do if you pack it full and tight is split up your sessions, or vape half of it in one sitting and the other half later.

A normal coarse grind like that from a typical 4-piece grinder still works great, so it’s pretty versatile in this regard, it’s not very finicky about herb consistency which is a nice characteristic.

I’d consider the Elite a combo conduction/convection vape, because even though the walls of the oven do heat up there’s also four air intake holes in the bottom of the chamber that let a decent amount of air pass through.

This vape heats up very quickly, typically in 30 seconds or less. The temperature I recommend starting at when you first get it is 375°, and you can easily adjust the temp in 1° increments with the two buttons on the side of the unit. 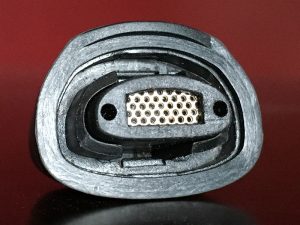 The reason I say to start at 375° is that I’ve found it to provide the best balance of vapor quality (taste, smoothness) and vapor production (visible clouds). Lower temps give you a purer flavor and higher temps will give you bigger clouds.

What I personally like to do is vape most of my session around 375° and then bump up the heat to about 410° for the last few draws to really squeeze out any remaining goodies.

Changing heat levels on the fly is easy and I’m actually impressed with the temp control of this unit, the vape really does perform differently even just 10 degrees in either direction.

Another nice characteristic of the Elite is that it’s not difficult to pull from, the draw resistance is very reasonable. Despite the thin air channel inside the mouthpiece it doesn’t feel restricted, I’d consider it above-average here (better than most).

To go along with the free-flowing draw is fast vapor production – you can draw for as little as 4 seconds and get a decent cloud from it, and this isn’t extremely common. 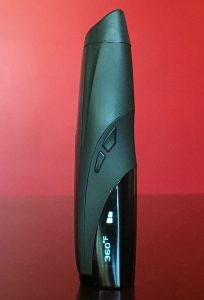 If you’re new to vaping this is something to pay attention to, because with some vapes you need to take a fairly long draw to get a satisfying hit (10+ seconds) and not everyone likes that.

One tip I have to maximize visible vapor is to wait a few extra seconds between draws, don’t take one pull after another with this unit it’s not the best way to use it. After you take a draw wait 20-30 seconds before going at it again, or before passing it to someone else.